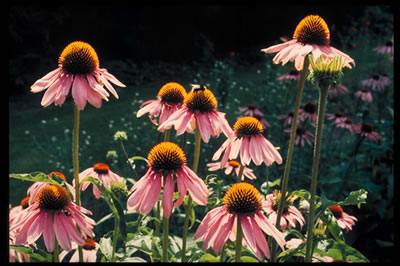 Also known as the purple or prairie coneflower, echinacea (pronounced ek-in-nay-sha) is a wild flower with daisy-like purple blossoms. It is native to the grasslands of central North America and is usually grown in the UK as a garden plant. The name echinacea is derived from the Greek word for prickly hedgehog referring to the sharp pointed scales on the dried flower heads. Three main species are used medicinally Echinacea angustifoliaE.purpurea and E. pallida.

Echinacea was used for centuries by Native American Indians to heal septic wounds and snake bites. History has it that they observed that echinacea was effective against the bite of a rattlesnake, and that it is was eaten by elk that were sick or wounded.
The plant also became a favourite among European pioneers in America and their doctors for treating infections. According to one 19th century doctor writing in a journal called ‘The Gleaner’ echinacea root was used ‘for nearly every sickness with good results’. It was also found to be the secret ingredient in many tonics and blood purifiers of the era.
Like many medicinal herbs, echinacea fell out of favour with the advent of modern antibiotics. But the last decade has seen it grow in popularity and it has become an important part of all modern herbal dispensaries.

Today, Echinacea can be found in tablet, chewable tablet, tincture and syrups. Adults and children can take Echinacea but it is important to check the information leaflet for the correct dose for individual products.

Registered herbal medicines containing echinacea are used today for the relief of symptoms of the common cold and influenza-type infections based on traditional use only.