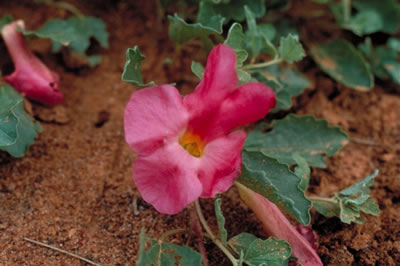 Belonging to the sesame family, devil’s claw (Harpagophytum procumbens ) is native to Southern Africa. Harpagophytum procumbens DC is mainly found in the eastern and south eastern parts of Namibia, Southern Botswana and the Kalahari region of the Northern Cape, South Africa. Harpagophytum zeyheri is a related species found mainly in the northern parts of Namibia and southern Angola. The two species both contain the active constituent harpagoside in their roots and are often used together in extracts that are described as “Devil’s claw extracts”.

Harpagophytum means ‘hook plant’ in Greek, while the common English name, ‘Grapple plant’ refers to the fruit’s shape and specifically its long protrusions with sharp, grapple like hooks, and straight thorns on the upper surface, which can cause severe injuries in humans and cattle. The leafy perennial has branching roots and shoots. It is its secondary roots, called tubers that grow out of the main roots that are used in herbal medicine.

The tuberous roots of the devil’s claw plant have traditionally been used to relieve rheumatic or muscular pain, general aches and pains in the muscles and joints and backache. In its region of origin, the Kalahari Desert of southern Africa, preparations are consumed for the same purposes and also as a general health tonic, and for treating general pain, fevers, ulcers and boils.

Registered herbal medicines containing devil’s claw are used today to relieve symptoms of backache, rheumatic or muscular pain, and general aches and pains in the muscles and joints. Based upon long-standing use as a traditional remedy.

The little hooks on devil’s claw serve a purpose as they are meant to attach onto animals in order to spread the seeds.