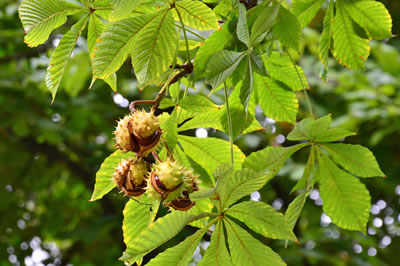 Horse chestnut (Aesculus hippocastanum L.) is found both as a tree and small shrub native to the Balkans but is now widely cultivated in other temperate countries within Europe, Asia and North America.

Its common name in the UK is the conker tree; many of us will recognise the tree’s fruit encased in a light green spine-covered coating that holds the nut, and some may remember removing and drying the nut to enjoy the playground game of conkers!

Horse chestnuts have been used historically as animal feed for farm animals; they are a valuable source of nutrients for deer, and some Native American peoples have included them in their diet. However, the outer covering of the horse chestnut nut is toxic, and the nut itself has to be boiled before being eaten.

Traditional Chinese herbalists use horse chestnut not only for treatment of circulatory problems, but also as an astringent, a diuretic, for reduction of oedema or swelling, to reduce inflammation, as an expectorant in respiratory problems, and to fight viruses.

Horse chestnut appears to control inflammation and swelling and to reduce the accumulation of fluid. Both the bark and the fruit from horse chestnut trees are used medicinally to strengthen and tone the circulatory system, especially the venous system.

Today, Horse chestnut has been researched in a number of randomised clinical studies which provide evidence that the herb seems to be effective for chronic venous insufficiency (CVI), mainly varicose veins.

The Horse chestnut’s wood is too soft for furniture-making or construction but is sometimes used in building crates and other packing cases.

Registered herbal medicinal products containing horse chestnut are used for relieving the symptoms of varicose veins, based on traditional use only.