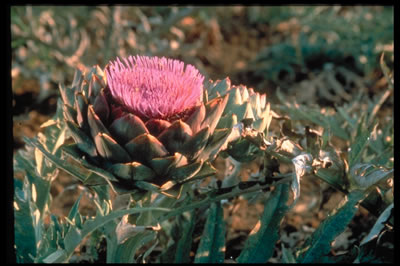 The artichoke (Cynara scolymus L.) belongs to the same botanical family as the milk thistle, daisy and sunflower. It can grow as high as two metres and produces large purple flowers in late autumn. The young unopened flower heads are often cooked, while the fleshy bracts together with the receptacle or ‘heart’ are much prized as a nutritional delicacy.

The health benefits of artichoke were first documented by pupils of Aristotle in around the 4th century BC. And since ancient times, the artichoke has been used for liver and gallbladder conditions, ‘cleaning the blood as well as the bladder’. The Egyptians valued it as a health and diet food, and Plinius described it as the ‘food for the rich’. Because of the health problems associated with an indulgent lifestyle such as liver problems, it was often served up as an antidote to rich fatty foods and too much wine.

Recent research suggests that artichokes could help to reduce the symptoms of indigestion (dyspepsia) and Irritable Bowel Syndrome (IBS) such as
nausea, bloating, constipation and trapped wind.

Since April 2014, all herbal medicines for sale in the UK and Europe must be approved by the Medicines & Healthcare Products Regulatory Agency (MHRA) having been rigorously checked for safety and quality. They must also display the Traditional Herbal Registration ‘THR’ logo on their pack.
Registered herbal medicines containing artichoke are used for the relief of digestive complaints, such as indigestion, upset stomach, nausea, feelings of fullness and flatulence (wind), particularly caused by over indulgence of food and drink, based on traditional use only.

Castroville, California is known as the Artichoke Capital of the World. (It is where Norma Jean (Marilyn Monroe) was crowned Artichoke Queen in 1947.