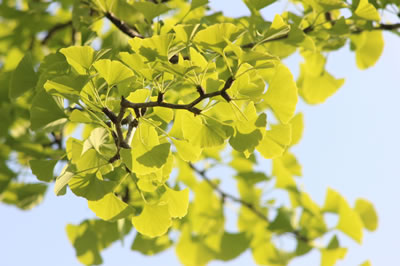 Ginkgo Biloba (Ginkgo biloba L.) is a slow growing evergreen tree with red berries and flowers found in colder, northern climates from Asia to the United States. A member of the Ginkgoaceae family, it is also commonly known as Fossil tree, Kew tree and Maidenhair tree.

It is the leaf that has medicinal use as an extract.

Ginkgo is renowned as one of the oldest living species and it is widely distributed in eastern Asia, especially China Japan and Korea. The tree is now also widely cultivated in Europe and North America. The seeds have been used as a food and in traditional Chinese medicine, have been used for the treatment of asthma, cough and enuresis for over 5,000 years.

The medicinal form of the herb is extracted from the fan-shaped leaves of the tree and a concentrated form of the herb, ginkgo biloba extract, is used to make herbal medicines. The herb is thought to increase blood flow to the brain and to the arms and legs by regulating the tone and elasticity of blood vessels from the largest arteries to the tiniest capillaries.

Today Ginkgo is used mainly to enhance cognition, and to present or reduce memory deterioration during old age, and in the milder forms of dementia including the early stages of Alzheimer’s disease.

The herb is also used for the relief of symptoms of Raynaud’s syndrome and tinnitus.

Ginkgo trees have two ‘sexes’, a male and female. The nuts from the female tree have long been valued in China and Japan as a culinary delicacy with healing properties.

Registered herbal medicinal products containing Ginkgo Biloba are used to relieve the symptoms of Raynaud’s syndrome and Tinnitus, based on traditional use only.