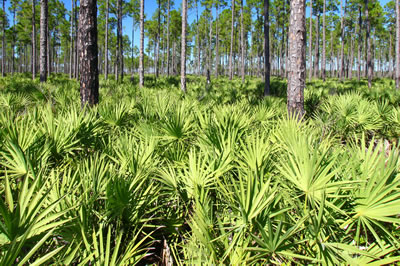 Saw Palmetto, Serenoa repens, is a plant found in Florida, Alabama and Georgia. A small, palm that grows in dense thickets, it has sharp teeth-like spines on each leaf stem which gives rise to its common name. Its reddish-black fruits provide a food source for wildlife and historically for humans too.

Saw Palmetto was used by Native Americans as a food and for its diuretic, sedative and aphrodisiac properties.

Early colonists noting the vitality of animals who fed on the berries gave the fruits to frail individuals as a general tonic. It has also been used to relieve persistent coughs and improve digestion.

Today, Saw Palmetto is used to relieve urinary discomfort of men with an enlarged prostate gland.

Harvesting the Saw palmetto was a risky business. Workers were easily cut by the razor-sharp leaf stems, and were at risk of being bitten by diamondback rattlesnakes that made their home in the shade of this scrubby palm.

Registered traditional herbal medicinal products containing saw palmetto are used to to relieve urinary discomfort in men with an enlarged prostate (also known as benign prostatic hypertrophy or BPH). Based on traditional use only.