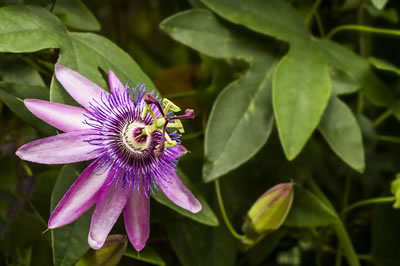 Native to South America, passionflower (Passiflora incarnata L.) is a climbing shrub that can grow as high as 9m. It is widely cultivated throughout Europe and produces wonderful showy flowers with white petals, and large stamens with orange-coloured sacs. These are surrounded by a crown of violet filaments, which is why it is often called the purple passionflower.

It takes its name from the Italian ‘fiore della passione’, referring to the flower’s resemblance to Christ’s crucifixion. 17th century Jesuit missionaries working in South America believed the stamens represented the wounds of Christ, the filaments the crown of thorns and the petals his apostles.

In North America, the passionflower is known as maypop. It was valued by Native Americans, mainly for its ability to heal bruises and wounds. The Houma tribe in Louisiana used the herb as a blood tonic, while the Mayans used the crushed plant to help reduce inflammation. Infusions of the pounded roots were used to wean babies and as drops for ear infections.

It was first described by a European botanist in the 1780s and, by the 19th century, had joined the herbal repertoire, initially as a remedy for epilepsy. As time went on, herbal practitioners started to value the plant for its calming, sedative and pain-relieving actions. Over the years, it has been used to help relieve anxiety, stress, fatigue, insomnia, muscle spasms, seizures, hysteria and hyperactivity in children.

Since April 2014, all herbal medicines for sale in the UK and Europe

must be approved by the Medicines & Healthcare Products Regulatory Agency (MHRA) having been rigorously checked for safety and quality. They must also display the Traditional Herbal Registration ‘THR’ logo on their pack.

Registered herbal medicines containing passionflower are used today for the temporary relief of symptoms associated with stress such as mild anxiety, based on traditional use only.