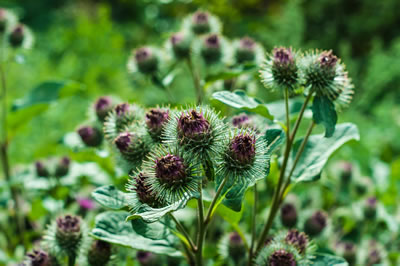 Burdock, Arctium lappa L. is native to Europe and northern Asia, and is naturalised in North America. The plant has dark green, large oval leaves and the prickly heads that flower from July through to October provide essential pollen and nectar for honeybees around August when clover is on the wane and before the goldenrod starts to bloom. The root is still commonly eaten as a cooked vegetable in Asia.

Burdock is traditionally used as a diuretic to flush the urinary tract and as an appetite stimulant. Burdock is also used topically to treat skin complaints such as eczema, acne and psoriasis.

In Europe, the burdock root was used as a bitter flavouring agent in beer before hops was discovered to have the same effect.

Today, Burdock is still used as a diuretic to relieve symptoms associated with water retention such as bloating.

In the early 1940s, after walking his dog one day, a Swiss inventor named George de Mestral noticed that seeds of the burdock plant had attached themselves to his clothes and his dog’s fur. Under a microscope, he examined the hook system that the seeds used to hitchhike on to his dog to aid seed dispersal. The result of his studies was Velcro!