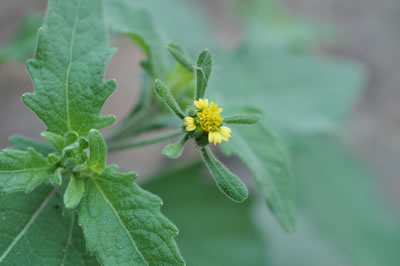 Sigesbeckia is an annual plant from the Asteraceae family. Sometimes spelt Siegesbeckia, the correct spelling is Sigesbeckia according to a paper published by The Royal Botanic Gardens, Kew in Proceedings of the Botanical Society of the British Isles in 1967.
In traditional medicine, there are several species of Sigesbeckia. Sigesbeckia pubescens is a sub-species of Sigesbeckia orientalis that is commonly used in traditional Chinese medicine. The branches of the Sigesbeckia plant are covered in purple-brownish hairs, as are the triangular leaves, which gives it its subspecies name pubescens. It has yellow tongue-shaped flowers that appear in late summer and early autumn.  Its full scientific name is Sigesbeckia orientalis L. subsp. pubescens (Makino) H.Koyama, but it is more commonly known as Sigesbeckia, St Paul’s wort and in some circles as ‘pig pungent weed’.

Sigesbeckia has been used in the traditional medicines of many countries across the world and was first referenced in China in 659 AD. Its Chinese Pinyin name is Xi Xian Cao.  In traditional Chinese medicine (TCM), Sigesbeckia is used to “dispel wind-dampness and strengthening the sinews: for wind-heat-damp painful obstructions”.  In Europe, the plant is commonly known as St Paul’s Wort.
The aerial parts of Sigesbeckia have been used traditionally to treat rheumatic conditions such as arthritis, pain in the joints and muscles, sciatica, as well as to treat hypertension and some forms of paralysis.
Sigesbeckia has a long history of safe use; it has been used to treat rheumatic disease in China for more than a thousand years.

In its natural habitat, Sigesbeckia has a pungent smell. It was named after the botanist and doctor, Johann Georg Siegesbeck who had disagreed with fellow botanist and the ‘father of modern taxonomy’, Carl Linneaus, over the way in which he classified plants.

Registered herbal medicines containing Sigesbeckia are used today for the relief of backache, minor sports injuries, rheumatic or muscular pain, and general aches and pains in the muscles and joints. Based upon long-standing use as a traditional remedy.