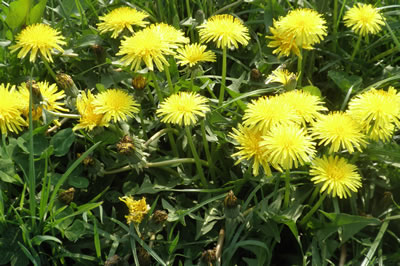 Usually regarded as a common garden weed, the dandelion (Taraxacum officinalis L.) belongs to the chicory family. With spatula-shaped leaves that are shiny, hairy and deeply serrated, it can grow as high as 30cm.

Its single yellow flower blooms throughout the growing season, opening at dawn and closing at dusk. Once the flower has matured the plant forms a puffball of seeds that are dispersed by the wind, or blown away by children!

Folk healers have long prescribed dandelion root for liver and digestive problems, and the leaf for fluid retention. It is first mentioned in Western medicine in the Ortus Sanitatis, a health guide written in 1485.

It is thought to have been named dandelion by a 15th century surgeon known only as Master Wilhelm, who compared the jagged shape of the leaves to a lion’s tooth dens lionis. Its botanical name, however, actually originates from the Arabic word tarakhaqun, which means wild chicory.

In France, the leaves have long been eaten in salads where it is called pissenlit – a reference to its history as a diuretic. The old English word is pissabed or piddlybeds. Master Willhelm described the dandelion as a cooling herb as do the Chinese, who have used it as a medicine since the 7th century.

Registered herbal medicines containing dandelion are used today to relieve the symptoms of mild digestive disorders, such as dyspepsia and flatulence and temporary loss of appetite based on traditional use.

Want to know what the weather is up to?
Dandelion flowers open in fine weather but close when rain is on the way.