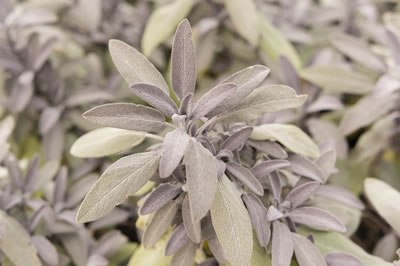 Salvia officinalis L. or more commonly known as Sage, belongs to the Lamiaceae family of plants. It is a perennial, evergreen plant with woody stems, green/grey leaves and when in flower, displays blue to purplish blooms. It is native in the Mediterranean although it is common throughout the world.

As a culinary herb, sage is used to add flavour to a variety of dishes but in particular, it pairs well with pork. In herbal medicine the sage leaf has been used to improve
memory; topically it has even been used to stem bleeding and to relieve minor skin inflammation.

Today, sage leaf is more commonly used to relieve excessive sweating that can occur during menopause.

Sage was sometimes called S. salvatrix (sage the savior), and was one of the ingredients of a blend of herbs called Four Thieves Vinegar that was supposed to ward off the plague.

Registered traditional herbal medicinal products containing sage leaf are used to relieve excessive sweating associated with the menopause. Based on traditional use only.