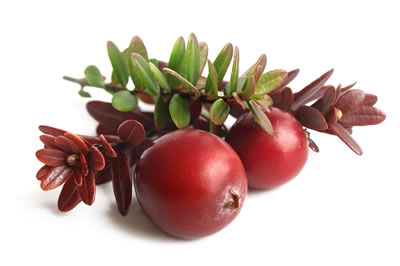 Cranberry is part of a group of evergreen dwarf shrubs or trailing vines. Native to North America where it is known as Vaccinium macrocarpon, the plant is closely related to the blueberry. The name is a shortened form of craneberry – the flowers of the low-growing shrub were thought to resemble the heads of the cranes that frequented the bogs where it grew. The berries are now widely cultivated throughout the United States. A British variety is also known as Vaccinium oxycoccus.

Today, cranberry is more commonly used to help prevent and relieve the symptoms of minor, lower urinary tract infections associated with cystitis in women. Studies have indicated that the berries possess infection fighting properties by inhibiting the adhesion of harmful microorganisms to certain cell walls lining the urinary tract, making the environment a less hospitable place for bacteria to replicate, and thus reduces the likelihood of infection.

Cranberry’s high vitamin C content makes it a good, natural way to increase this vitamin in your diet.

Registered traditional herbal medicinal products containing cranberry are used to relieve the symptoms of minor lower urinary complaints associated with cystitis in women only. Based on traditional use only.