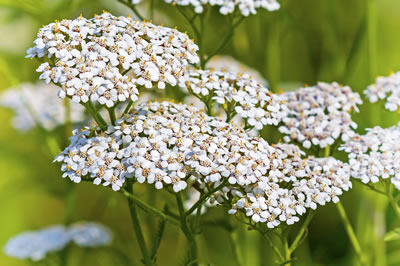 Yarrow (Achillea millefolium L.) is a flowering plant in the Asteracea family. Native to the Northern Hemisphere, it has feather shaped leaves and texture, and is sometimes referred to as plumajillo, Spanish for ‘little feather’. The plant particularly enjoys the temperate climate found in Asia, Europe and North America.

Yarrow used to be known as herbal militaris, for its use in stanching the flow of blood from wounds. In ancient Greece, Homer tells of the Centaur Chiron teaching Achilles to use yarrow on the battlegrounds of Troy.

A. millefolium has seen historical use as a medicine, often because of its astringent effects.

Historically Yarrow has been used to relieve a variety of ailments. A dark blue essential oil extracted by steam from its flowers can be used as an anti-inflammatory or in chest rubs for colds and influenza. The leaves encourage clotting, so it can be used fresh for nosebleeds. The aerial parts of the plant are used for phlegm conditions, as a bitter digestive tonic to encourage bile flow, and as a diuretic. The aerial parts act as a tonic for the blood, stimulate the circulation, and can be used for high blood pressure; it is also useful in menstrual disorders, and as an effective sweating remedy to bring down fevers.

It is thought that yarrow works in synergy with other herbs to amplify their medicinal action. It can therefore often be found as one of many ingredients within a tincture or herbal medicine.

In the kitchen, yarrow was a popular vegetable in the 17th century; the younger leaves were cooked like spinach, or used in a soup. Yarrow is sweet with a slight bitter taste. The leaves can also be dried and used as a herb in cooking.

Since April 2014, all herbal medicines for sale in the UK and Europe must be approved by the Medicines & Healthcare Products Regulatory Agency (MHRA) having been rigorously checked for safety and quality. They must also display the Traditional Herbal Registration ‘THR’ logo on their pack.
Registered herbal medicines containing yarrow are used for the symptomatic relief of rheumatic pain and general aches and pains in the muscles and joints, based on traditional use only.

In the Hebrides, folklore dictated that a leaf held against the eyes would deliver a vision, or premonition of future events!