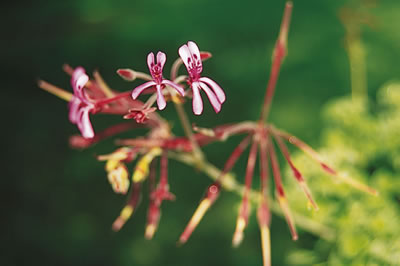 Belonging to the geranium family, Pelargonium (pelargonium sidoides) is native to South Africa and grows throughout the Eastern Cape where it has long been used as a natural antibiotic. The long stalked leaves of this rosette-like plant are mildly aromatic, heart- shaped and velvety. It bears lots of distinctive reddish- purple flowers throughout the year, especially from late spring to summer, with a peak in mid summer.

Pelargonium has thick underground root-like branches, which have evolved to help it survive the grass fires, which break out regularly in its natural habitat.

Pelargonium has long been used by the Zulu, Basuto, Xhosa and Mfenfi people for a variety of ills including coughs and upper respiratory infections, but it wasn’t until the 1890s when an Englishman Charles Stevens came across this fascinating herb that it started to be noticed in the UK.

Travelling to South Africa in search of a cure for tuberculosis, Stevens had a consultation with a Basuto tribal healer who made up a concoction of pelargonium – the local medicinal plant. Stevens made an amazing recovery and returned to England with his mysterious remedy, which became known as ‘Steven’s Consumption Cure’.

Over the next few years Steven’s remedy was used to treat tuberculosis but with the advent of synthetic drugs it was soon forgotten.

Today herbal medicines containing pelargonium can be found in tablet, tinctures and syrups. Adults and children can take pelargonium but it is important to check the information leaflet for the correct dose for individual products.

Pelargonium is known as “umckaloabo” in South Africa, originating from the Zulu word for a bad cough.

Registered herbal medicines containing pelargonium are used today to relieve symptoms of upper respiratory tract infections such as the common cold based on traditional use only.