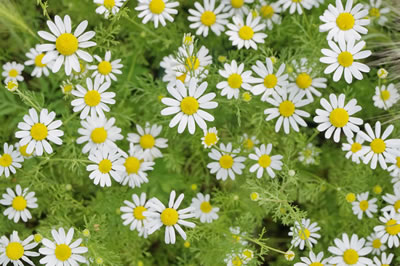 Matricaria (Matricaria chamomilla L.) is otherwise known as German chamomile or wild chamomile. It originates from southern and eastern Europe.

The species is a common wild plant found in gardens and wasteland. The name ‘chamomile’ is derived from the greek Kamai melon which means “ground apple” and reflects that it has an apple-like aroma and flavour.

This herb has long been used to prepare a gentle soothing tea. Chamomile is widely used both internally and externally to treat inflammatory conditions. Topically, chamomile cream, gel and ointment are applied to treat nappy rash, sore and cracked skin (especially sore nipples during breastfeeding), haemorrhoids, bruises, insect bites and burns, including after radiotherapy.
Chamomile products are also used to soothe inflammation of the mouth and gums, and for infant teething. Internally, usually in the form of a tea, chamomile is used to treat digestive ailments, including bloating and flatulence, and as an anxiolytic for restlessness and mild insomnia due to nervous disorders.

A chamomile bath can be relaxing and provide relief for dry, irritated skin or sunburn.

Registered herbal medicinal products containing Matricaria are used for the symptomatic relief of teething pain and the symptoms associated with teething which are sore and tender gums, flushed cheeks and dribbling, based on traditional use only.